13 of the Most Iconic Deleted Tweets From Taylor Swift

With her second re-recorded album Red (Taylor’s Version) looming around the corner, it’s only time that we take a look at some of Taylor Swift’s funniest, most random tweets that are no longer on the bird app.

2. This wholesome interaction with Brad Paisley is something the internet needs and should always look back on. If only we still had wholesome moments like these nowadays... 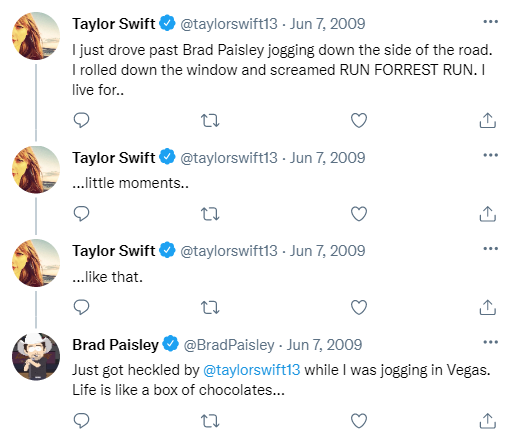 3. Taylor Swift, everyone. Singer-songwriter with over 400 awards, one of the most influential figures in the industry, and the inventor of cereal parties.

4. Good day to everyone, except to the people who thought of packaging for scissors. Tay’s got a good point here, y’know.

5. Taylor reminding us that a millionaire pop star can be just as clumsy as we are. That must’ve stung. Yikes!

6. I really thought I was the only one who got startled every time an ice maker starts doing its thing. It’s good to know Taylor and I have some similarities after all.

7. Imagine if we had the confidence to use a Sharpie as an eyeliner without looking like a clown. Only Taylor could ever pull off something like that.

8.  Demi and Taylor throwing ideas at each other on Twitter is the best thing that happened during that year.

9. Don’t worry guys, she probably has enough money now to treat all of her fans to laser eye surgery, so it’s safe to say she’s got 20/20 vision now.

10. Same, Tay. Isn’t it frustrating that even in 2021, where we got electric cars and tweets as t-shirts, remote controls are still a hassle to use?!

11. Looks like Taylor Swift is a cat person too.

12. Okay, we’ve actually all had this phase. For real. Now that she mentioned it, where’s my journal?

13. Taylor casually flexing that her hair ties have been to more countries than the majority of us ever would and could.

That’s the end of this list! Though this list showcased how goofy and clumsy Taylor used to be, she’s definitely grown into a mature and influential figure that we all still love. Don’t forget to stream Red (Taylor’s Version)!