6 Spooky Tweets That Are Perfect for Halloween in 2021

If Halloween movies aren’t giving you the spooks, then these 6 tweets (that are actually real!) might do the trick. Just make sure to tread lightly as these tweets aren’t for the faint of heart.

From weird stories from the forests to insane claims of the sun disappearing, let’s go through the 6 spookiest tweets that are perfect for Halloween in 2021. Ready to be frightened?

6. The Cabin in the Woods, except it’s real life…

A four-day trip to a rural cottage in Victoria was planned by this Australian writer, but he did not anticipate being tormented by anything ominous in the woods. Strange sounds on the roof, unexplained package deliveries, windchimes that played without a breeze, and moths that seemed weirdly enamored with his temporary dwelling were all reported by him during his journey. 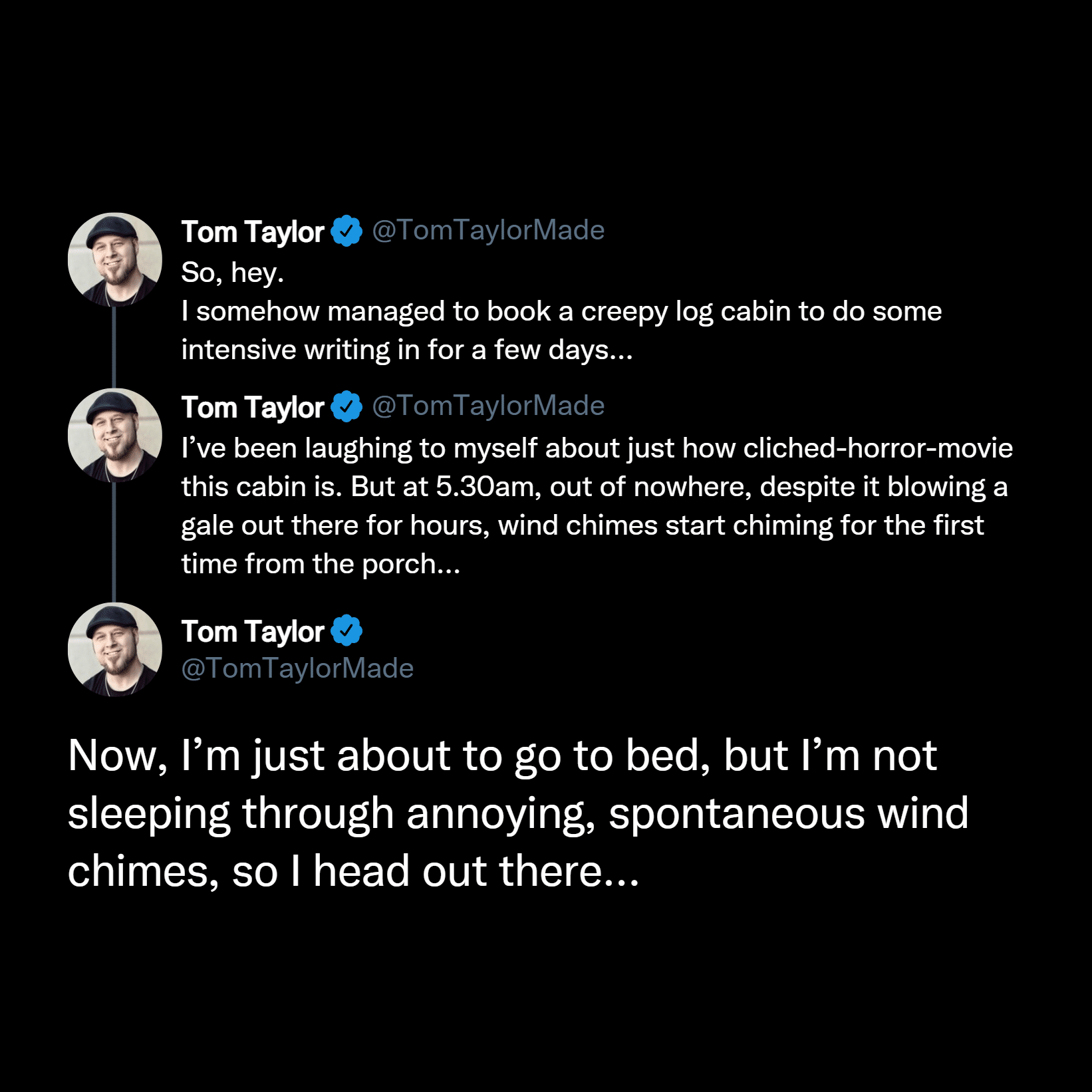 Seeing that he’s a writer, nobody can really verify whether this spine-chilling thread actually happened or he just finessed and used his writing skills to fool Twitter… either way, his story is one way to get you at the edge of your seats during a spooky Halloween night.

In 2018, a Twitter user stated that the sun had set and that tornado sirens, screaming, and gunshots could be heard ringing through the night. Strange humanoids peering through the windows. 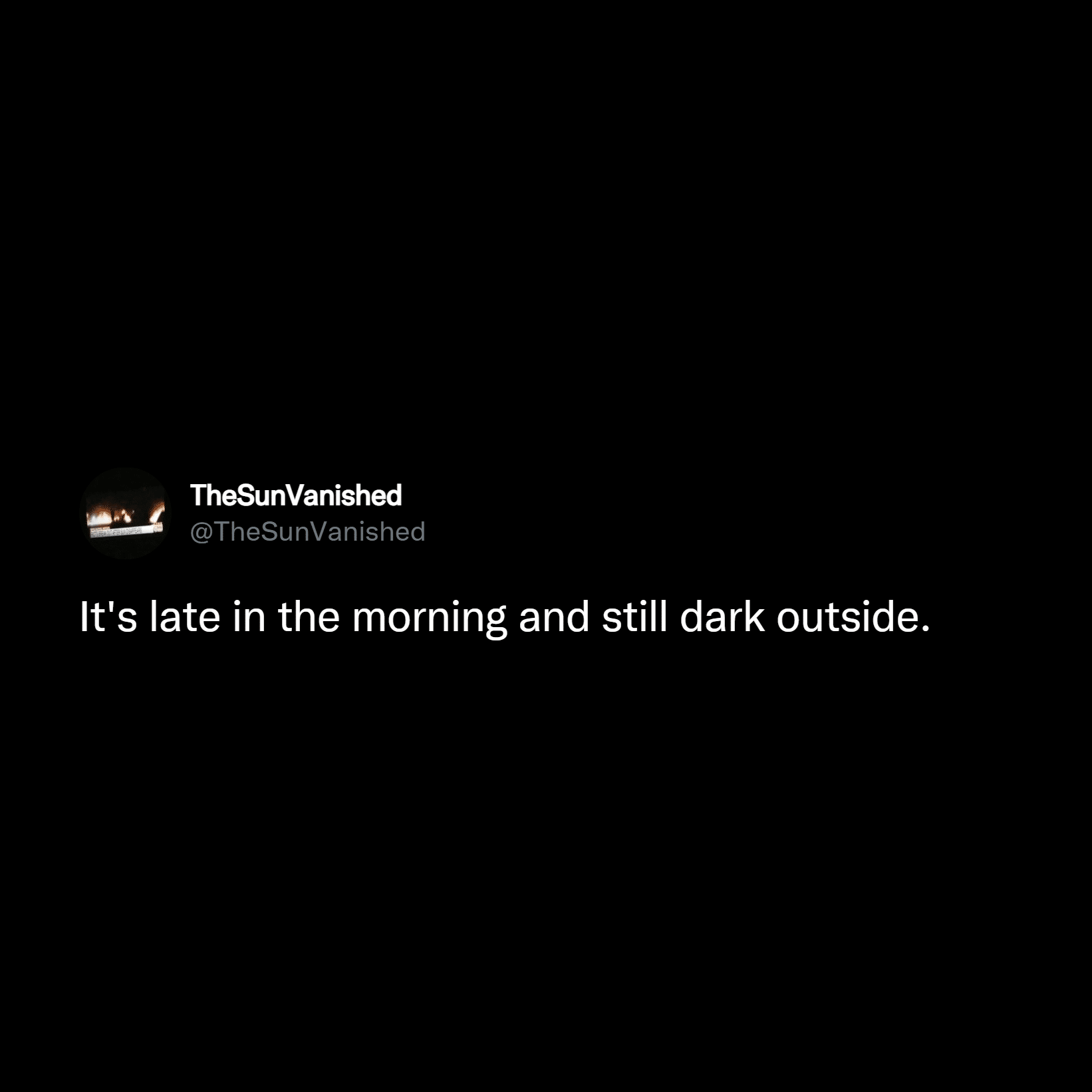 Neighbors vanished, the water from the faucets changed color, and the user tweeted for two years about a struggle to find a friend and go to safety. Odd ships and strange lights could be seen glinting through the windows and flickering overhead. Just before Halloween in 2020, the tweets unexpectedly halted. Was this user transported in a parallel universe..?

4. A sleep paralysis demon that has come into life

Adam Ellis, a New York writer and cartoonist, began seeing the ghost of a child in his residence in August 2017. He thought the child's name was David and that he died of a head injury, based on a dream. Over the course of several months, Ellis documented the drama by capturing photographic proof of David at two of his apartments. That Christmas, David even followed him back to Montana. David is said to have started possessing Ellis around early 2018. 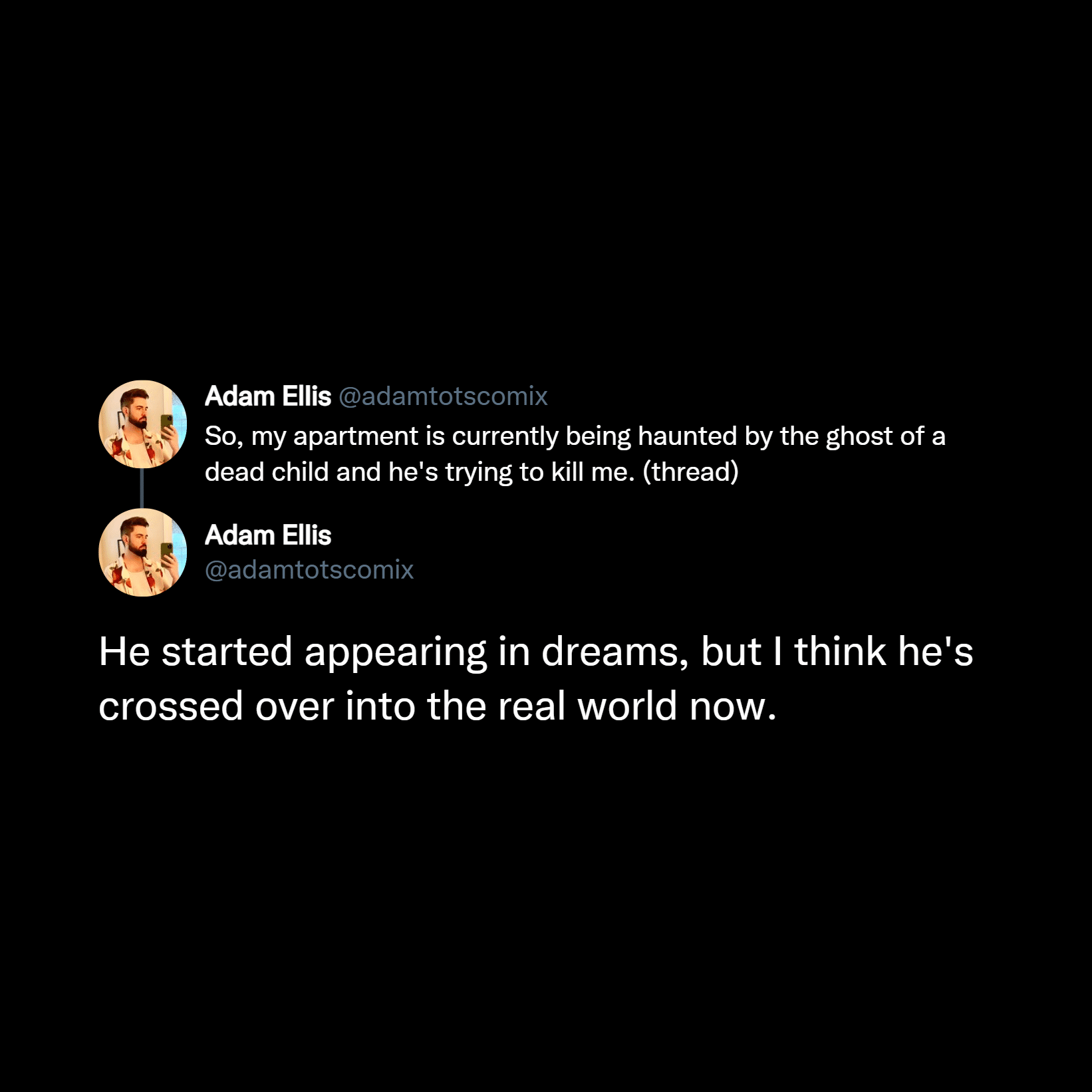 This spooky yet believable thread is further enhanced by Adam’s haunting illustrations that showcase the demon’s characteristics and physical features. TBH, I would immediately move out the first night I sense something’s off with the place.

3. The best thread to follow for spine-chilling short stories

Instead of telling a single narrative over the course of several tweets, Twitter user Priscilla posted a collection of spooky stories she'd seen online. From Tumblr, Facebook, to even YouTube, her thread is probably one of the scariest Twitter threads out there that one won’t dare to read during Halloween. 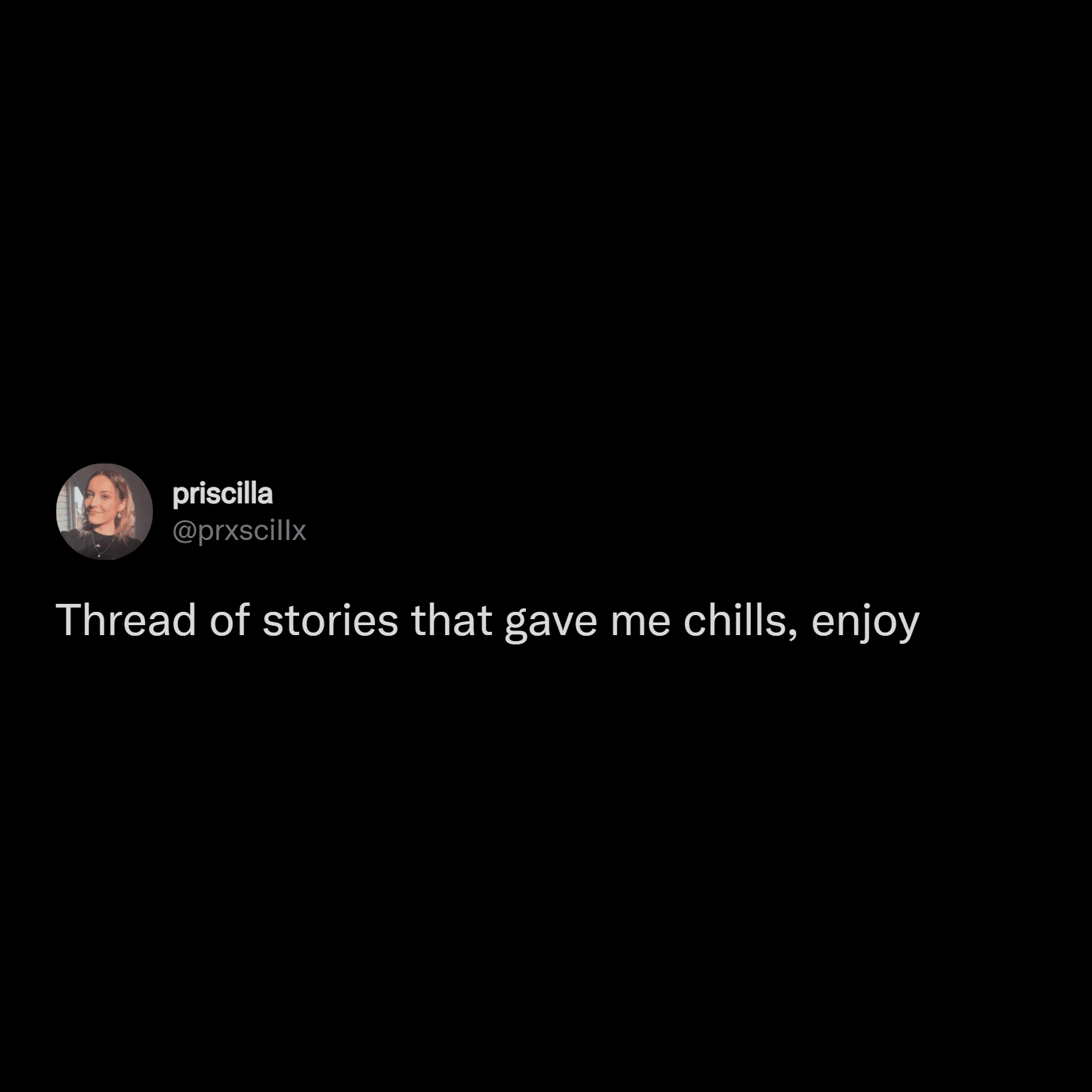 Some of the topics discussed include unexplained handprints in the snow, disappearances, foretelling, and terrible coincidences. There are stories here that deal with people who have committed suicide or tried suicide, so take this as a trigger warning.

2. Finding a lost phone with a dead person as the wallpaper.

Nela Garca discovered a phone on the sidewalk in Madrid way back in 2018 after it had been abandoned. On the home screen of the unlocked phone was a picture of a woman. Marta Gutierrez had a Facebook account on her phone, but the picture on her home page was of someone else, a woman named Beatrice who had died in the United States many years earlier. 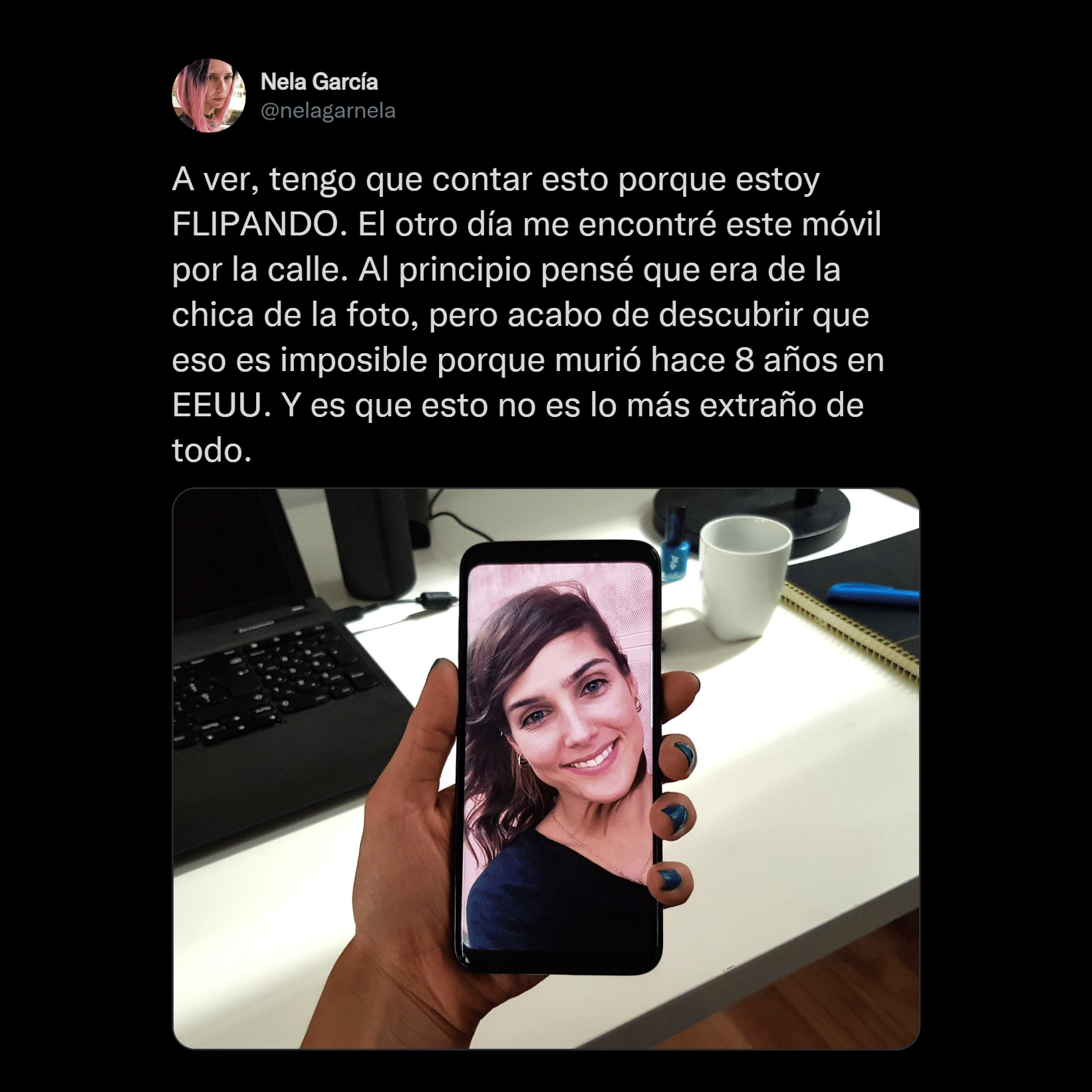 As Nela dug deeper into the phone, she found weird text messages and random strings of numbers. Despite the fact that the story is written in Spanish, you may follow along in English by clicking on Twitter's translate button. The first tweet of the thread roughly translates to:

Look at this, I have to tell this because I'm FLIPPING. The other day, I found this phone on the street. At first I thought it was from the girl in the photo, but I just discovered that this is impossible because she died 8 years ago in the US. And this is just the tip of the iceberg.

Greg, a Twitter user who had only met his grandfather once before he died, was left in charge of his house. Strange things started happening to him after only a few hours of being there. While Greg was out getting groceries in the nearby town (25 minutes away), someone nailed a triangle of sticks and twine to the front door. 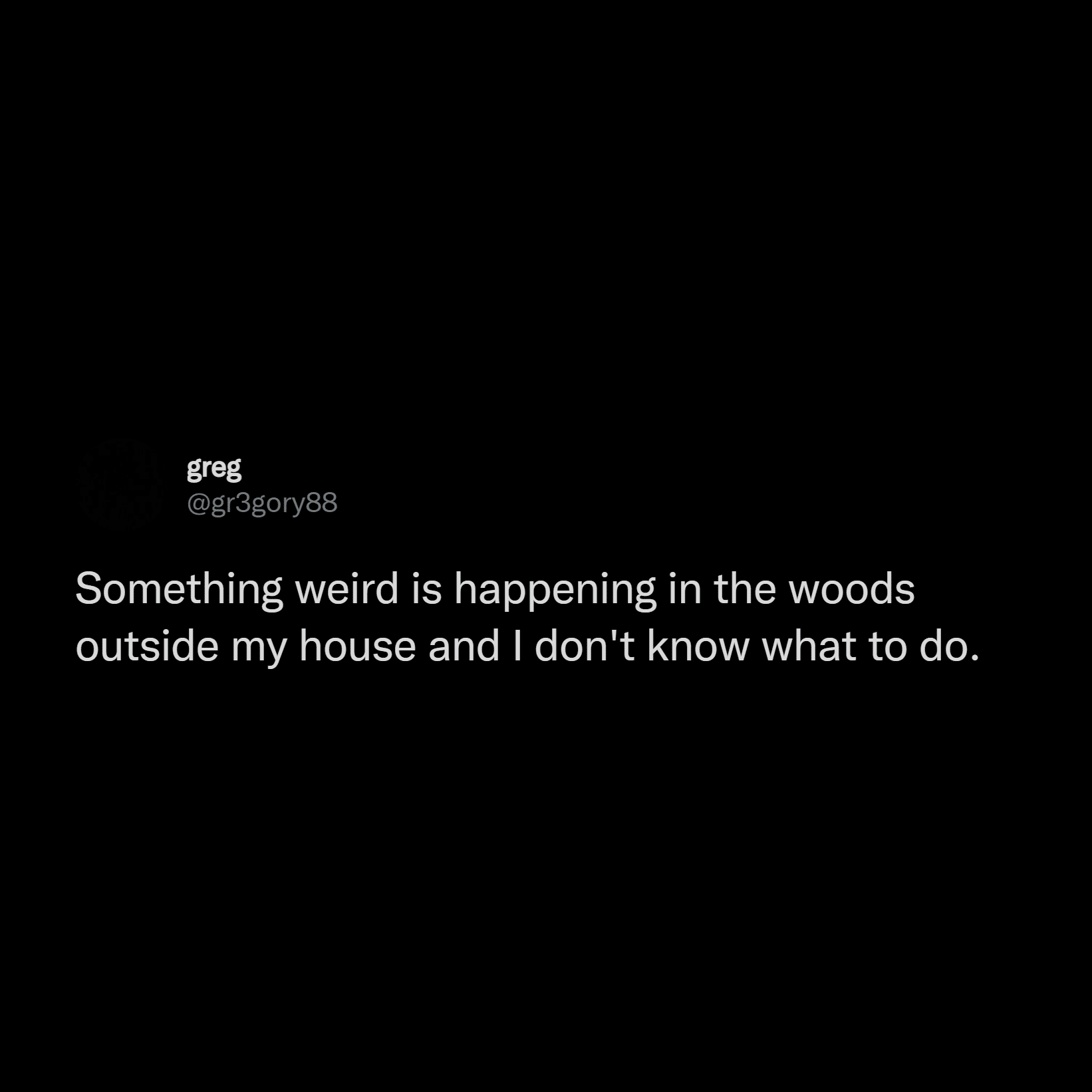 As Greg walked around the property, he discovered more weird artifacts, including a notebook and a hoodie that had clearly been used. Over the course of nearly three months, his experiences in the house of horrors unfolded. Ever since January 2019, there have been no signs of any activity on Greg’s Twitter account.