The 7 Most Controversial and Iconic Celebrity Feuds of All Time

Celebrity feuds and conflicts become overnight trends the moment they start. And as much as we hate to see the same headlines all over the internet and social media, some of these rivalries are just too good to not find entertaining. In this list, let’s go through the 10 most controversial and iconic celebrity feuds of all time—from the short-lived arguments to the most heated rivalries Hollywood has ever seen. 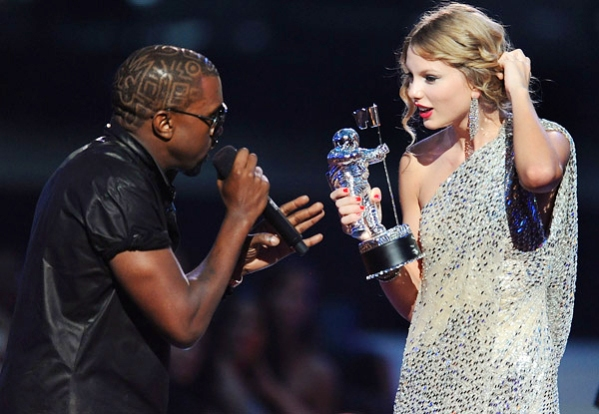 Of course, Kanye, or according to his recent name change, Ye, and the queen of deleted tweets, Taylor Swift’s long-running feud is first on our list. It all started when Kanye memorably interrupted Taylor's VMA acceptance speech in 2009. Following Kanye's apologies for the event, Taylor wrote "Innocent," a touching song for the rapper, and the two appeared to have made amends—emphasis to the word appeared.

... because in 2016, Kanye West released "Famous," a song in which he focused some nasty lyrics at Taylor. When Taylor publicly condemned the song, Kanye's wife, Kim Kardashian, leaked hidden recordings of a private phone call in which the pop singer appeared to approve of the lyrics, sparking an outpouring of support for Taylor on the internet. Most recently, though, leaked audio of the entire phone call appears to back up Taylor's account of events... and the feud just appears to be far from over.

But hey, at least Taylor got to finally finish her speech at the recent 2021 Grammys where Folkore won Best Album of The Year. You deserve it, Tay! Paris Hilton's BFF Nicole Richie wasn't the only one with whom she had issues in the 2000s. Paris and Lindsay Lohan were formerly inseparable friends while being Hollywood's "It" girls, but their friendship abruptly frayed in 2006 after Lindsay was caught with Paris' ex-boyfriend, and Paris kept significantly silent while her buddy Brandon Davis disparaged Lindsay on tape. From there, the two celebrities fell into a terrible cycle of publicly attacking one another, making up, and then feuding again.

Today, it appears that Paris and Lindsay's difficult, back-and-forth "frenemy" relationship is still going strong. Paris rekindled their feud in 2019 when she described Lindsay as "beyond lame and embarrassing." Lindsay then responded with a sweet Instagram post about Paris, before jokingly pretending in an interview that she didn't know who Paris was. Oh, the infamous 2018 feud between Cardi B and Nicki Minaj, who can ever forget? The two rappers appeared to take jabs at each other in their songs, which sparked rumors of a feud. It all culminated, of course, in the infamous brawl at the Harper's Bazaar party during New York Fashion Week, where Cardi allegedly threw a shoe at Nicki. On the same day, Cardi sent an Instagram message directed at Nicki, claiming that her nemesis had crossed the line by insulting her personal life and approach to parenting.

After more vicious social media exchanges, the two hip-hop artists appeared to call a truce a month after the altercation, with Nicki reportedly declaring a cease-fire on Twitter. "Let’s focus on positive things only from here on out," she added. Cardi then responded with the following caption on Instagram: "Alright then! Let's keep it positive and keep it pushing!" A good end to a rather heated feud between the 2 New York rap queens. 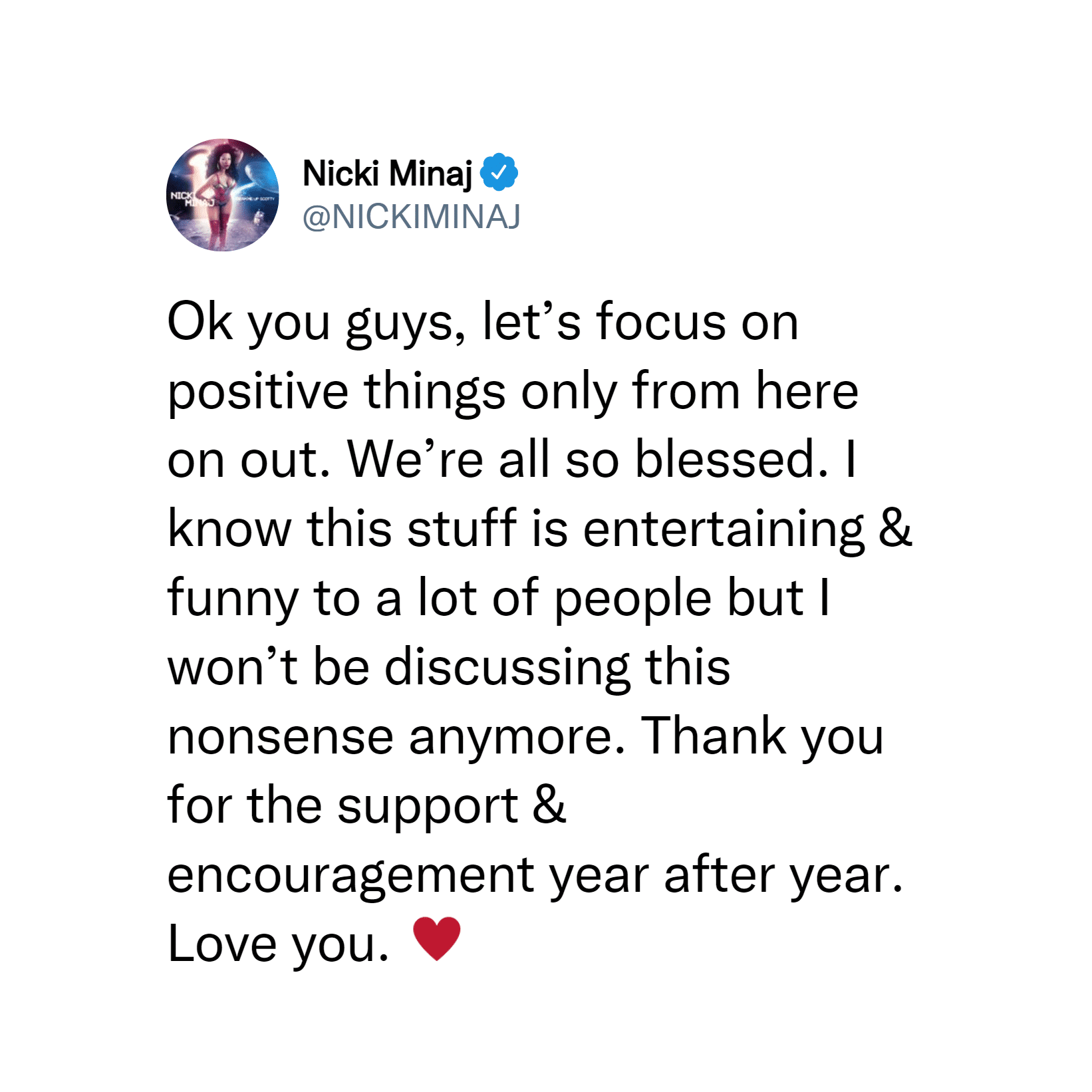 Who can forget the rivalry that existed between the two pop stars? Britney and Christina's friendship dates back to their days as members of The Mickey House Club, but things reportedly soured when the two stars were pitted against each other at the start of their careers, with rumors of a love triangle involving Justin Timberlake. From there, the two stars continued to take potshots at each other in the press, with Christina referring to Britney as "a lost little girl in dire need of guidance" at one point.

Christina put the rumors of a quarrel to rest in 2008. "It must have appeared as if we were competing with one other, but Britney is someone with whom I used to hold hands," she explained. "On 'The Mickey Mouse Club,' we were all stupid young girls. It's been quite a journey for both of us!" The stars appear to be on excellent terms nowadays, with Christina even uploading a photo of herself and Britney on Instagram in 2018. According to fans, the rivalry between Machine Gun Kelly and Eminem began with a now-deleted tweet from Kelly in 2012 in which he stated that Em's daughter, Hailie, was "hot."

Fans assumed Eminem had ignored the remark at the time, but it appeared that he was harboring bitterness behind the scenes. In 2015, Eminem had suspended MGK from Shade 45, his very own radio station.

There are more details to the feud since it got very personal and heated, but let’s just jump into the most important things like the rappers’ diss tracks toward each other. On September 4, 2018, MGK released the track Rap Devil which in just the first few bars, already calls out Eminem for his beard and age. The rap world was polarized with this track, some saying that it’s the best diss track of all time, while others clowned the rapper for disrespecting a rap legend like Eminem.

Of course, Slim Shady did not take this diss track lightly. 11 days after MGK’s Rap Devil release, Eminem gave the hip-hop world Killshot—his anger and distaste for MGK packed in a 4-minute track. If you were at the heart of this controversy, you’d definitely remember Em’s legendary bars like “This is it, as big as you gonna get, so enjoy it, had to give you a career to destroy it”. 🔥

Nowadays, it still seems that the two haven’t made amends yet as Eminem dissed MGK yet again in his 2020 track, Zeus. Hip-hop feuds are really something else. 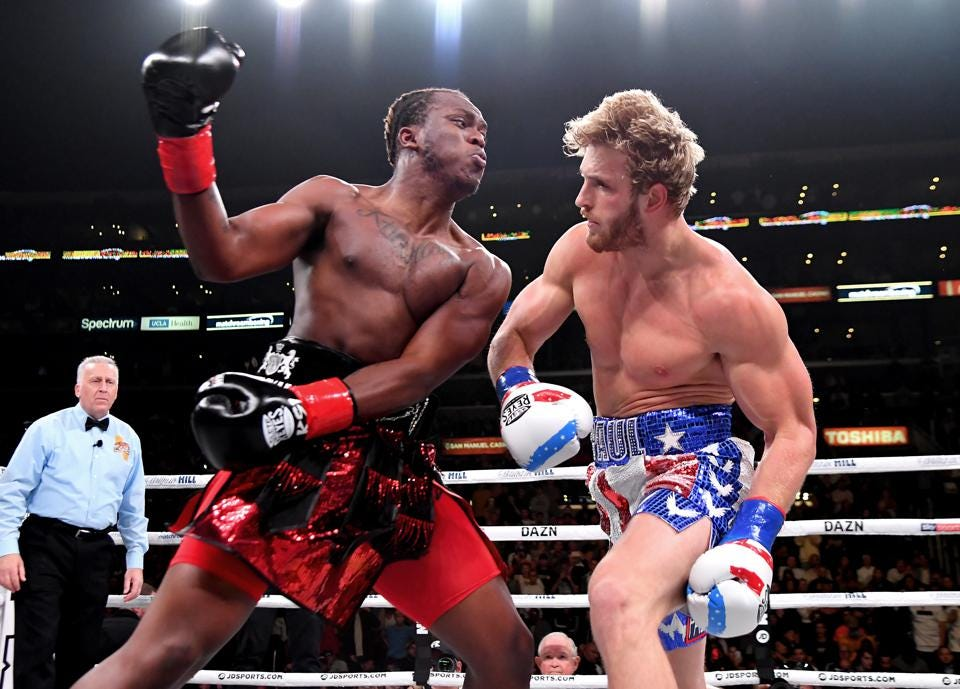 If you’re deep into YouTube drama, controversies, and the whole shtick, then you probably heard of either KSI or Logan Paul already. While these two YouTubers have their fair share of their own controversies—namely Logan’s 2017 Japan Forest video and KSI's long list of edgy jokes from his past videos that could get him cancelled today, their feud had evolved into this messy fight that jumpstarted the YouTube boxing scene.
KSI began his boxing career before Logan, on February 3, 2018, when he faced YouTuber Joe Weller. The Paul brothers were then called out by KSI after he won by knockout in the third round.

After the triumph, KSI added, "If any YouTuber wants it, they can come get it." "I don't care if it's Jake Paul, Logan Paul, or any of the Pauls." Of course, being the egotistical maniac that Logan Paul used to be, he immediately accepted KSI’s invitation. Their first boxing match took place in 2018 and concluded in a draw.

Following the disappointing result of the match, a lot of things happened. From their chaotic press conferences to numerous diss tracks and even personal attacks against each other’s families, the KSI vs. Logan Paul feud is one of the most entertaining yet long-running rivalries on the platform.

Fortunately, Logan Paul got humbled after he lost to KSI in their second professional boxing match. Since then, noticeable change in Logan Paul’s demeanor is evident in his recent videos and KSI had also moved on from the feud by focusing on music, albeit the UK YouTuber repeatedly stated that he is more than willing to box Logan Paul’s brother, Jake, to also “humble” him.

Nowadays, the two have reconciled and have been good friends—even doing a podcast together where the two casually laugh off their hilarious moments together. As expected, Kanye has had issues with many people, not just Taylor Swift. That includes Jay-Z—though the two hip-hop artists have been longtime friends and collaborators since the 1990s, their relationship has reportedly deteriorated in recent years. Kanye West openly chastised Jay-Z for not contacting him in 2016, saying: "Call me, bruh, Jay-Z. You haven't called me yet." Soon after, in his song "Kill Jay-Z," Jay-Z responded with a verse about Kanye: "You ain't a saint / This ain't KumbaYe / But you got injured because you did cool by Ye."

In an interview with The New York Times in 2017, Jay-Z addressed the disagreement, breaking his silence about his relationship with Kanye. “With us, it's a difficult connection. Kanye started his career on my label. As a result, I've always been his big brother," he explained. "We're both entertainers, too." It's always felt like there was an underlying competitiveness between you and your older brother... But it'll always be good, we'll always be good."