You’re not going crazy—Twitter did get an update, and it has caused quite the ruckus. 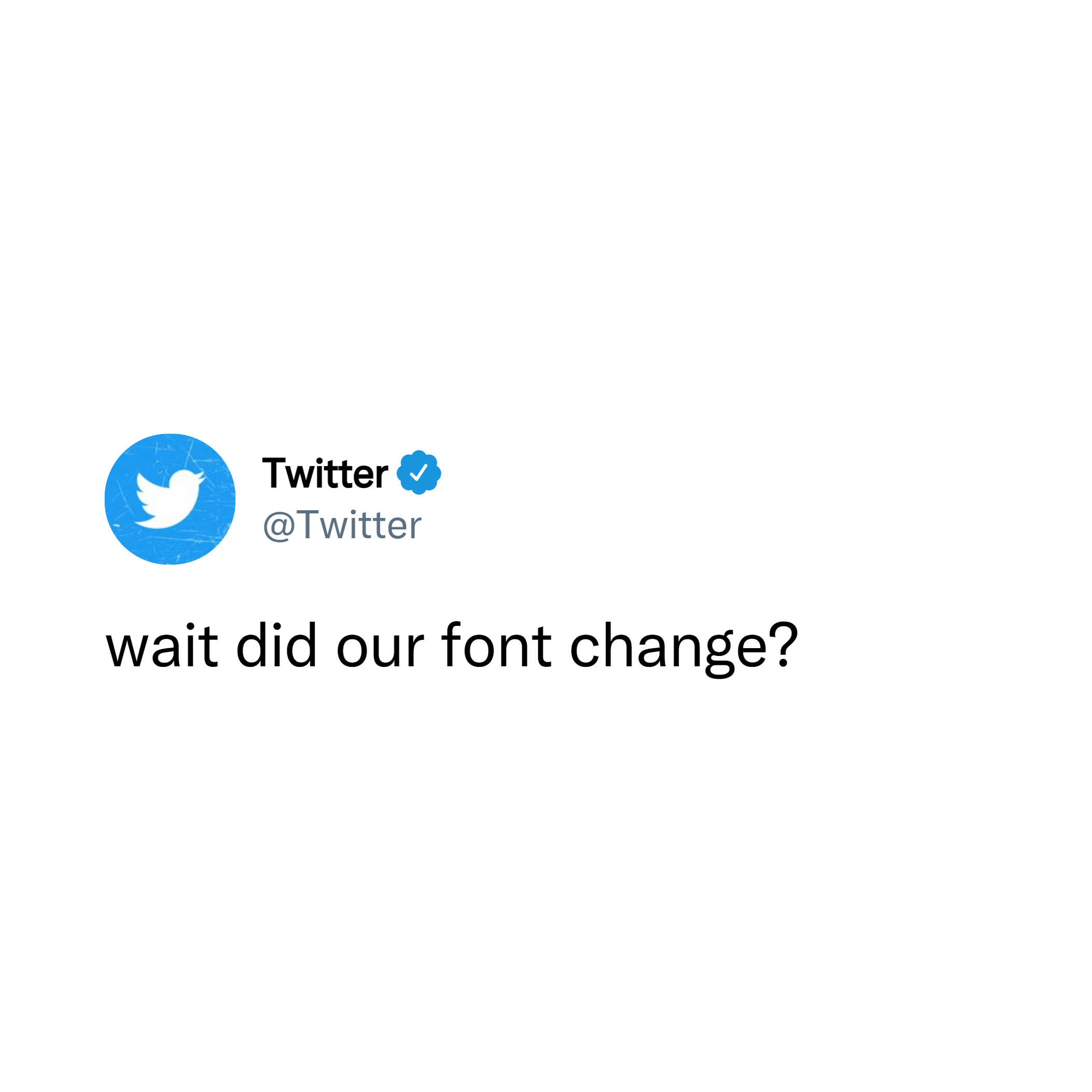 In case you haven’t noticed, Twitter rolled out a design update on August 4, 2021. Just as expected, the community’s thoughts were polarized. The first 50% didn’t even notice that there were any changes at all until their friend mentioned it to them. And the other 50%, well... let’s just say the update gave them a headache. No, that wasn’t a metaphor. The new font, appropriately named Chirp, actually gave some users a headache. Let’s take a closer look at why this is the case and how people are both ranting and raving about the new Twitter update.

While change is good, changing things that people see and use every day like fonts and colors can be quite difficult to adapt to. So much so that some people got actual headaches that drove them away from the bird app. One of the changes that the Twitter community found rather unnecessary was the tweaks with the site’s color scheme. Before, users were able to customize the color scheme to their liking, but this update did not only kill customization—it also made the buttons so bright, that it almost defeated the purpose of using dark mode. 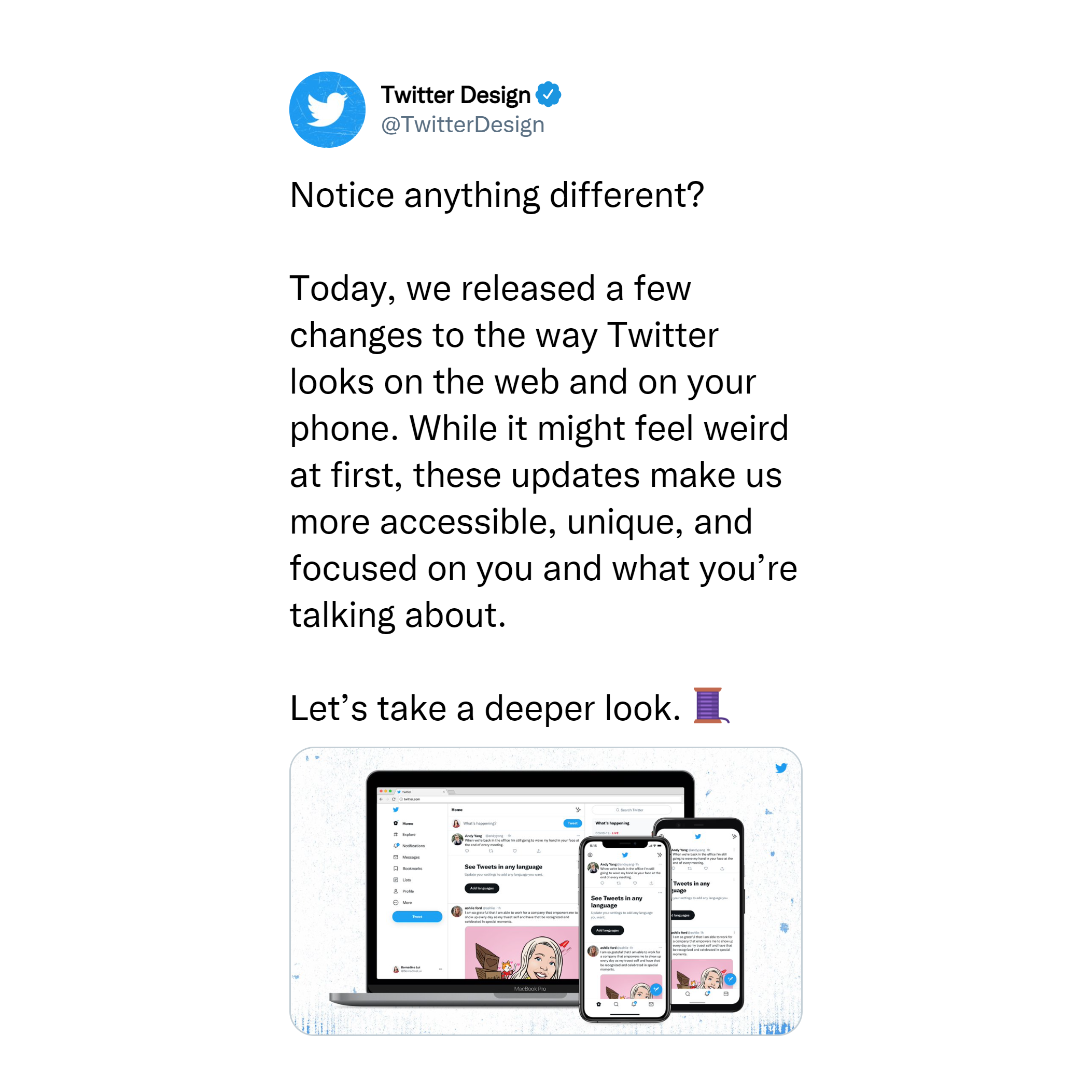 According to folks at Twitter, these design updates are supposed to improve visibility, readability, and accessibility. Additionally, they also revealed that these changes were in the works since January of this year and that their research has proven that although people took a while to get used to the font, they still preferred it over the old one.

Chirp is the word 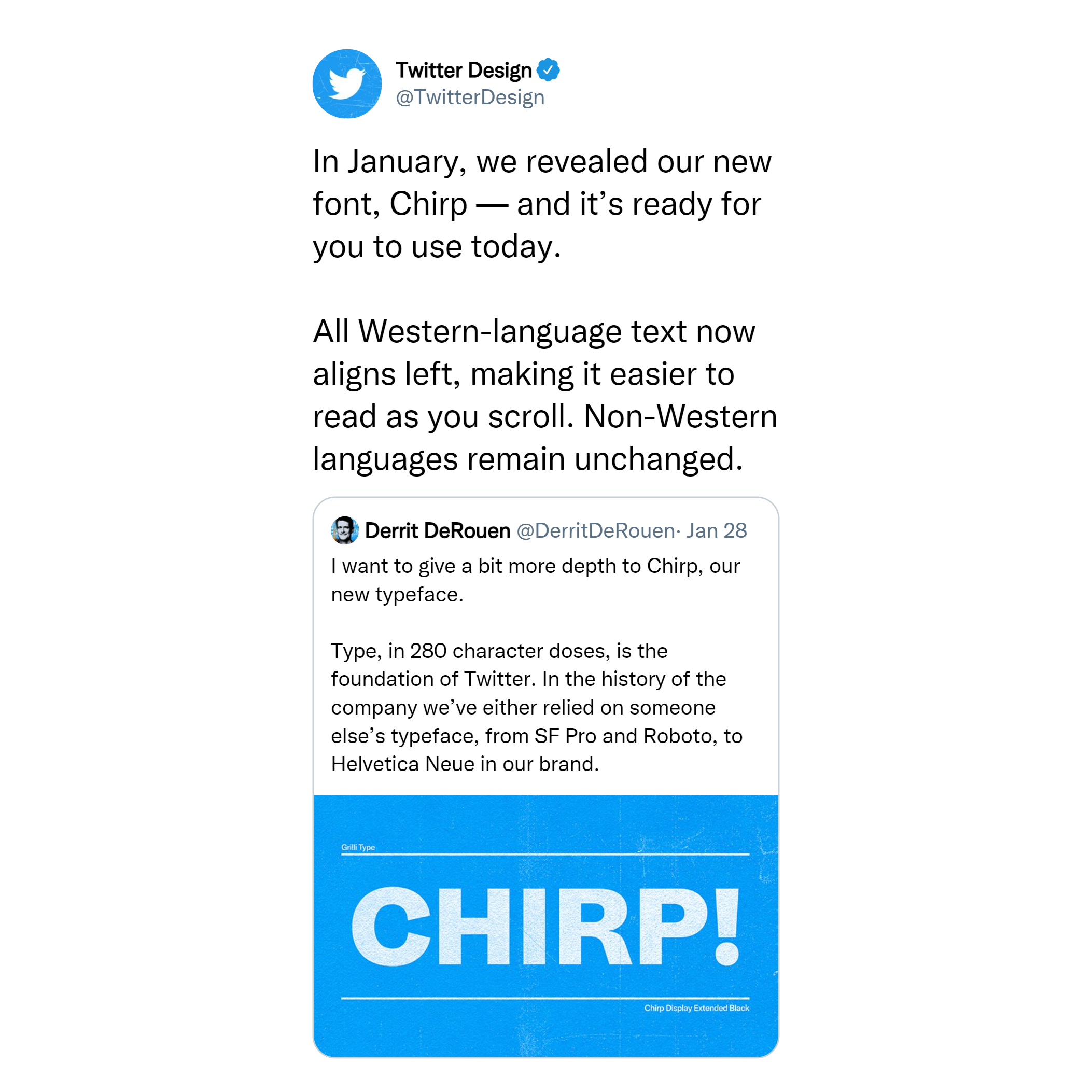 The (biggest) elephant in the room is the new typeface, Chirp. Whether you love it, hate it, or it gives you headaches, it might be here to stay since the Twitter Design team really took their time to develop a font that everyone will get used to. Oddly enough, some people found Chirp so intrusive, that it lured them away from the app. Here’s what the Twitterverse has to say: 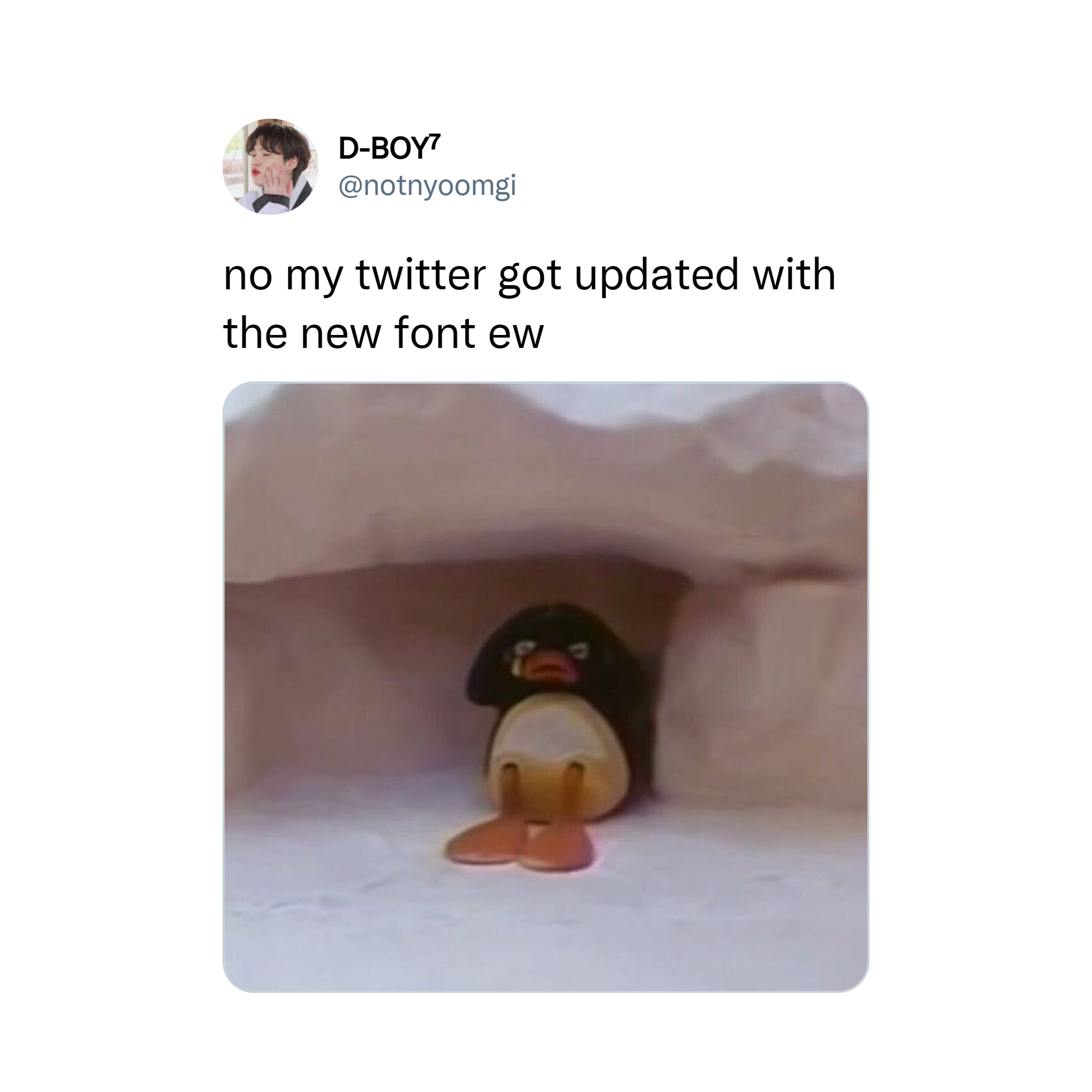 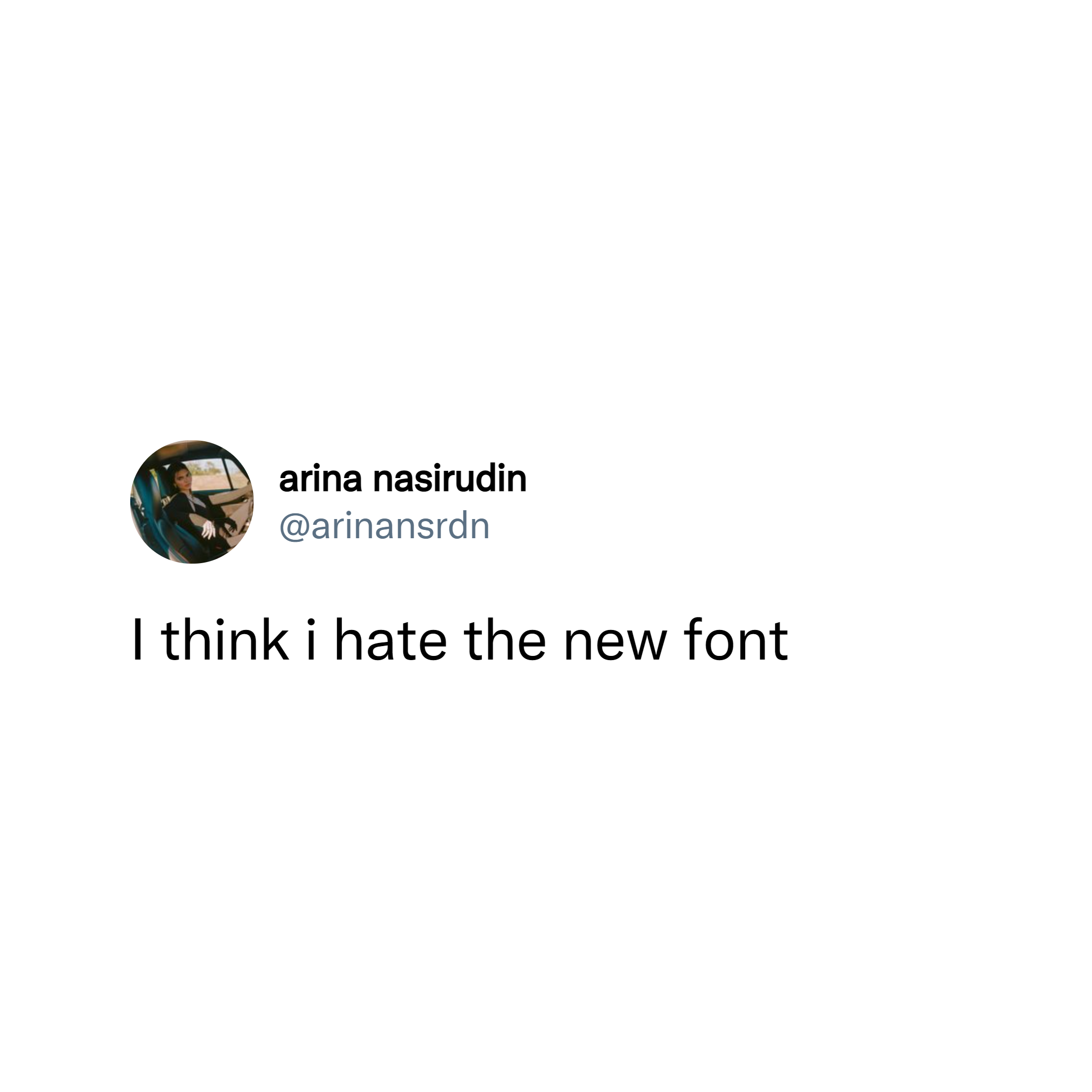 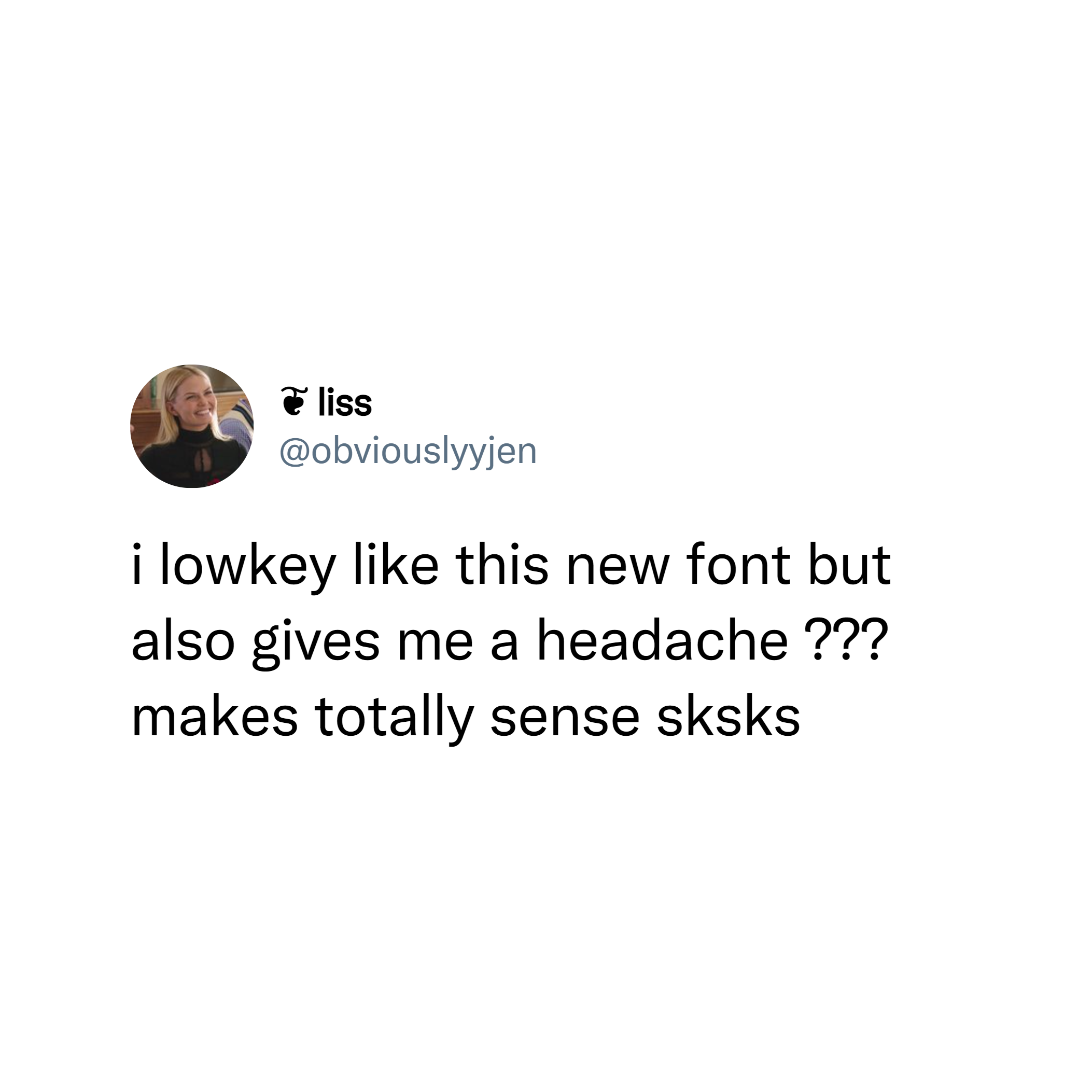 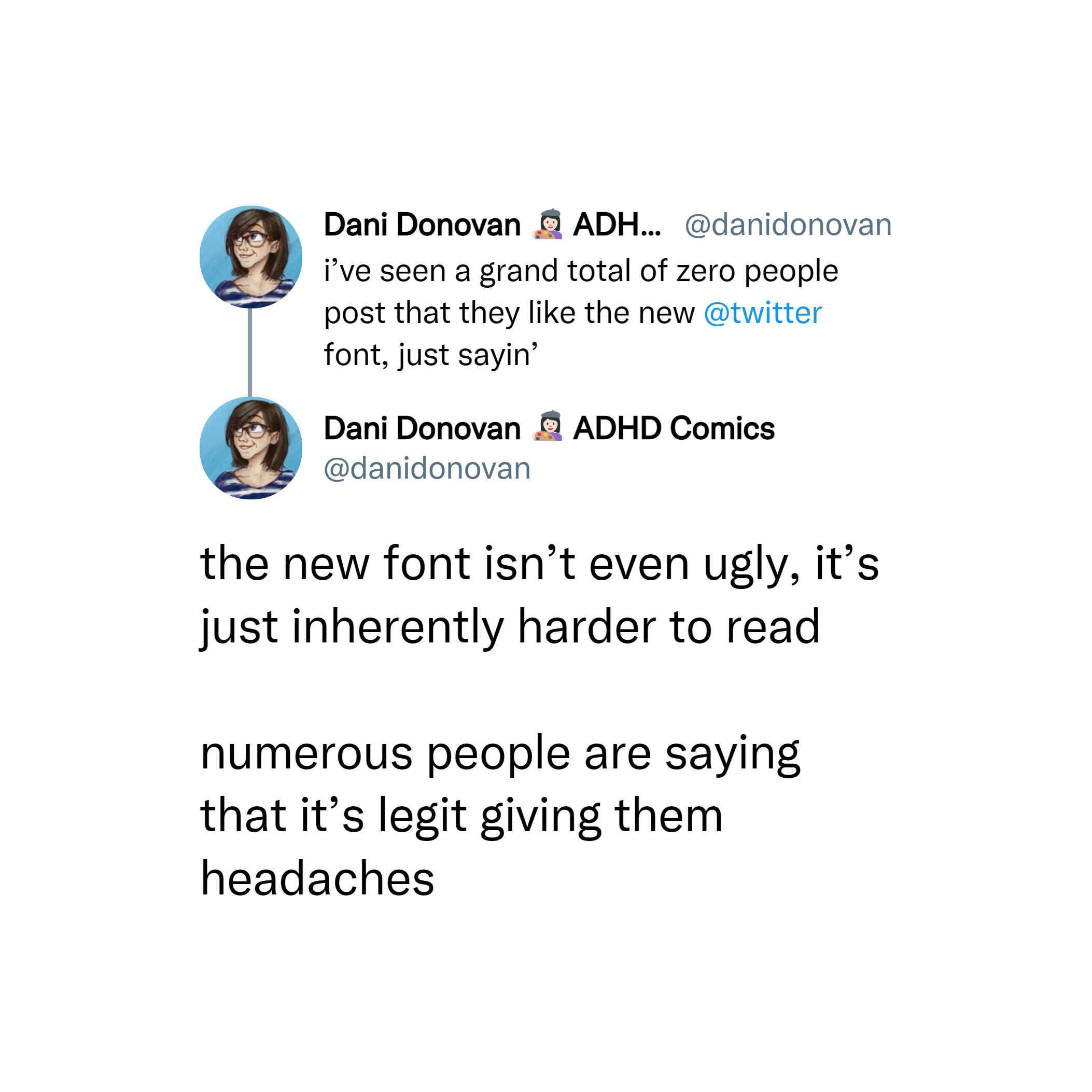 Meanwhile, on the other side of the spectrum.. 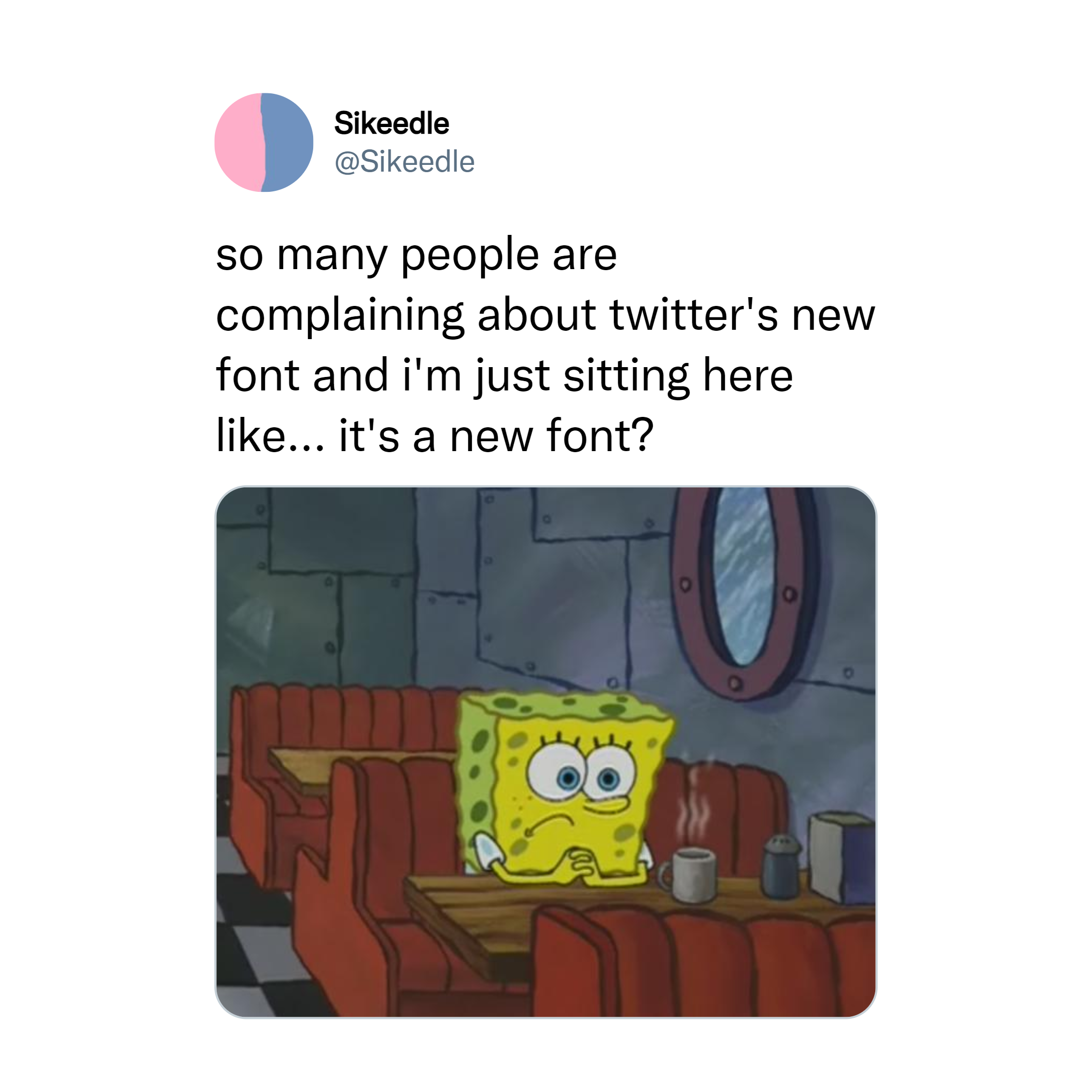 Despite the polarizing thoughts of the community, it's safe to say that some people are finding the font difficult to read. It is unclear whether there’s any scientific explanation behind this or people are just jumping the gun too soon, but when the Twitter community complains, it’s got to be serious.

You might be itching to know if there are any fixes or ways to roll back the update, and unfortunately, the best way to dodge this update (if you’re the other 50% who finds the font and color schemes a downgrade) is to not update the app. Looks like disabling automatic app updates does pay off from time to time.
Nevertheless, we know how this is ending—you'll have to update the app at some point in the future anyways, so you won't be able to escape it. You can run (for now), but you can never hide.

Cool font, but how about the edit button?

Based on Twitter’s release notes, most of their updates focus on accessibility and bug fixing with some visual updates on the side, just like this recent one. So what's next for the tweeting experience? Well, it is unfair to come to a conclusion that they would never release such an update, but it might be because of how Twitter’s CEO vision of the platform has never changed ever since its inception. Depending on how you feel about Twitter, this could be a good or a bad thing. 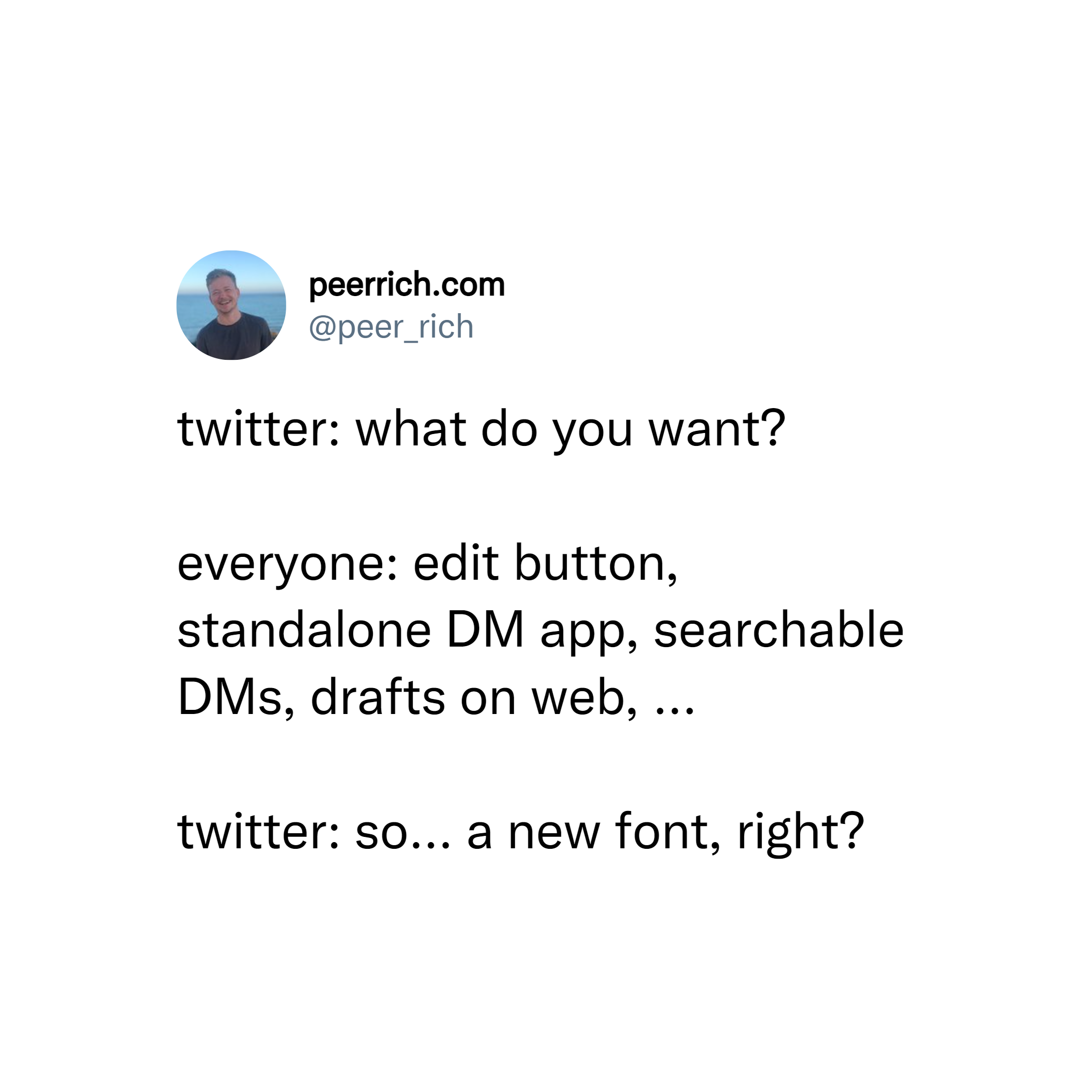 In a WIRED Tech Support interview of Twitter CEO Jack Dorsey from 2020, he answered the only question that matters. When asked if Twitter will ever see an edit button, @jack replied with a firm, "No."

“The reason there's no edit button [and] there hasn't been an edit button traditionally is we started as an SMS text messaging service. So as you all know, when you send a text, you can’t really take it back. We wanted to preserve that vibe and that feeling in the early days.” — Jack Dorsey

Okay, Jack, point taken. (Though people are still going to ask for it, you know). But how about some quality of life changes like DM searching, drafts on web, bookmark management, and more? Unfortunately, it’s really hard to predict what these social media platforms are going to do next.

In a world where everything unexpected can happen, we just have to watch and find out what Twitter’s response to this fiasco is going to be. The possibility of a rollback isn't 100% gone because we know what happened to Fleets, but let’s not get our hopes up either way. Whether we like what they do or not, Twitter is still the home of our beloved rants, unpopular opinions, and internet friends. Regardless of how many changes Twitter rolls out, you'll always be able to customize your tweet t-shirts to your exact liking.